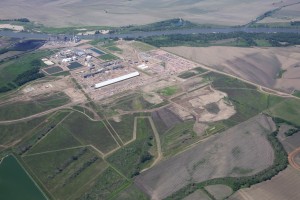 CF Industries’ Port Neal Nitrogen Complex is located on the banks of the Missouri River in rural Sergeant Bluff. The company is investing approximately $2 billion to triple the facility’s production of anhydrous ammonia and produce granular urea.

The Port Neal Nitrogen Complex is a manufacturing facility owned by CF Industries, a global leader in the manufacture and distribution of nitrogen-based fertilizers used by famers worldwide. It is located on about 1,700 acres in the Port Neal industrial complex, 15 miles south of downtown Sioux City. The Complex is a Siouxland fixture, with a 50-year history of providing excellent employment opportunities and supporting the community through a strong commitment to corporate citizenship.

At present, CF Industries’ Port Neal Complex produces anhydrous ammonia, urea liquor, UAN solutions and diesel exhaust fluid (DEF). It has the capacity to produce and ship up to 850,000 tons of nitrogen products for agricultural and industrial use each year.

That is all changing as the site undergoes a transformational expansion that was announced in late 2012 and will be completed in 2016. At the time of its announcement, the approximately $2 billion expansion was the largest economic development project in Iowa’s history. At completion, the complex will have tripled its production of anhydrous ammonia, the basic building block for nitrogen-based fertilizer, and brought on line a world- scale granular urea production facility. The expansion also includes additional truck and rail transportation infrastructure, storage facilities for ammonia and granular urea, new administrative offices and several other associated structures and buildings.

As a result of the expansion, the company will have more than doubled its Port Neal work force, adding approximately 120 well-paid, permanent positions with CF Industries and approximately 700 indirect jobs. The project is also employing about 2,500 temporary workers at the peak of its construction. In addition to creating good jobs, the completed project will also mean a more certain supply of nitrogen fertilizer products for American farmers and a significant increase in tax revenues and economic development for the region.

For all that is changing at CF Industries’ Port Neal Complex, its core values will remain: